Dr. Martin shows great attention to detail in his approach to treating patients.  If you are looking for a doctor who is kind, compassionate, results driven and willing to treat the whole patient, not just the condition, then you are in the right place.

Dr. Martin constantly strives to improve and update his knowledge in the field of Chiropractic and Rehabilitation.  He has completed post-graduate study emphasizing the treatment and rehabilitation of whiplash injuries, physical impairments, headaches, neck, and back pain.

After working three years as an Associate Doctor for another Chiropractor, Dr. Martin decided to start his private practice and founded Schertz Chiropractic in 2005.

His favorite hobbies include playing golf, playing guitar, and spending time with his family. 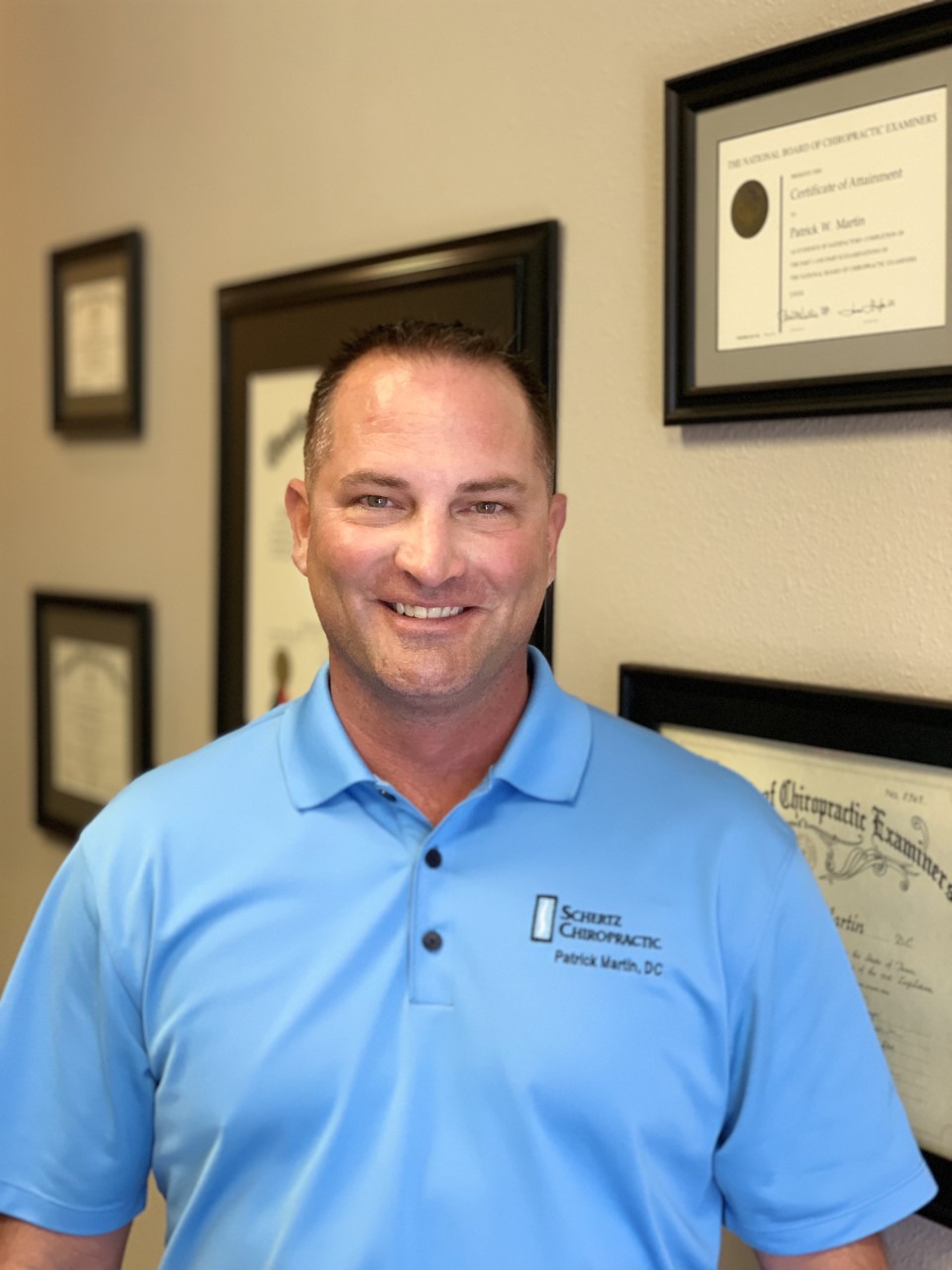 Dr. Mathew is originally from Chicago and comes to us following practicing in Magnolia, Texas.  He received his D.C. and B.S. degrees from Palmer College of Chiropractic in Davenport, Iowa. His undergraduate studies were completed at the University of Illinois at Chicago and at Palmer.  While at Palmer he participated in several extra-curricular activities including: Motion Palpation, Activator, and Applied Kinesiology Clubs.

Dr. Mathew believes in continuing to build his knowledge of Chiropractic, rehabilitation, and wellness.  He has completed several post-graduate studies in Applied Kinesiology, Cox Flexion Distraction, and is National Board Certified and Physiotherapy Certified.  He is a member of the American Chiropractic Association.

Dr. Mathew firmly believes in Chiropractic principles and his philosophy of practice is that “your body heals itself.”  He shows great attention to detail, compassion, and empathy as he treats the whole patient, not just the condition that is presented. He believes that patient interaction makes him a stronger person.

A Day in the Life of Dr. Dan would include activities like: playing football and 8-ball pool, traveling, and reading research papers.

He grew up in the Indian Orthodox church and one of the most influential people in his life is his grandfather.

“If you love what you do you will be successful.” 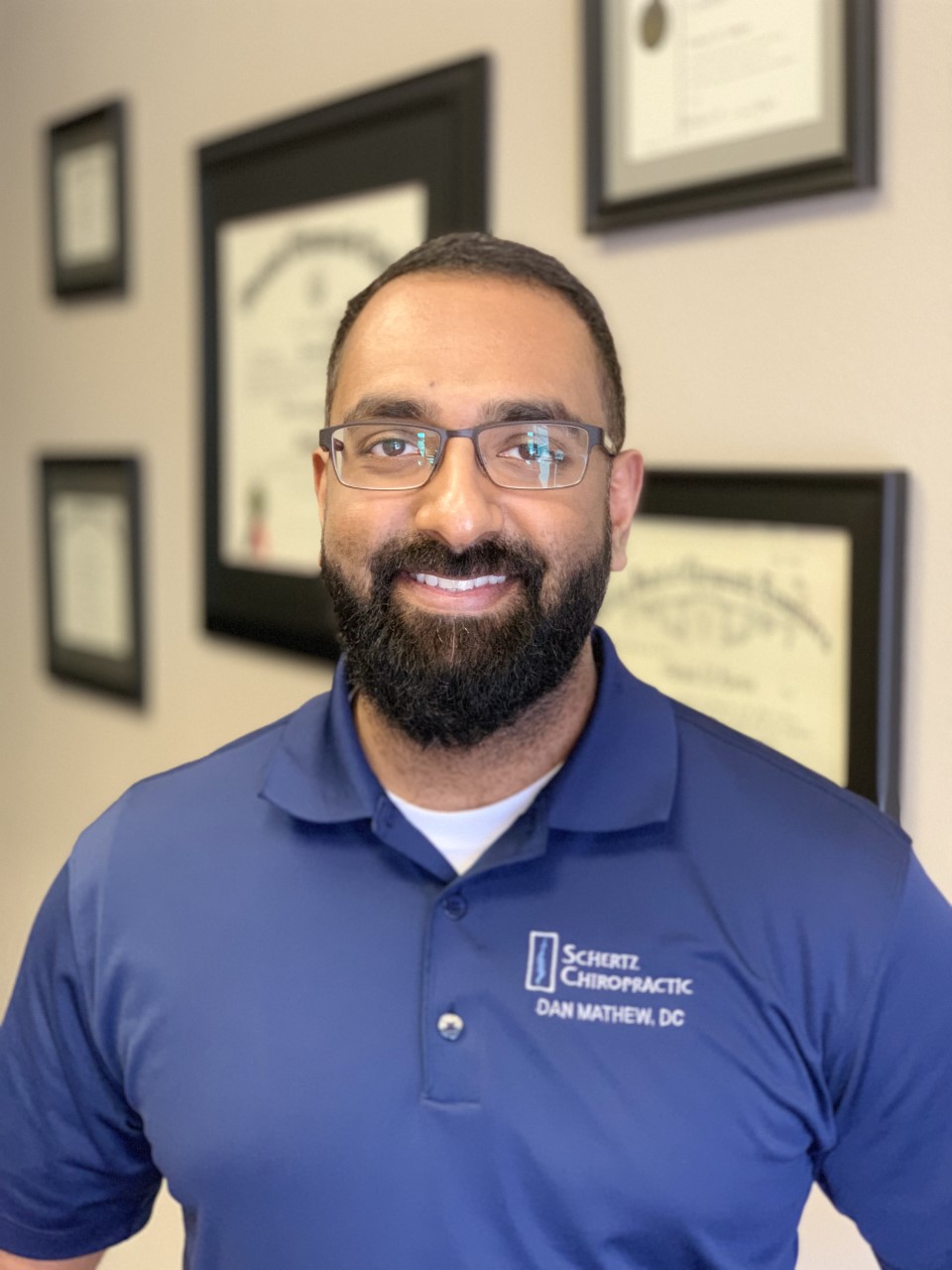 Dr. Acosta is originally from San Antonio and attended Central Catholic High School.  He later went on to complete his undergraduate studies at the University of the Incarnate Word, and graduate studies at the University of Texas-San Antonio receiving his Master’s in Health & Kinesiology with a focus in Exercise Science/Biomechanics. During his graduate studies, Dr. Acosta had the opportunity to develop, train, and rehabilitate athletes of all ages through CrossFit, opening CrossFit The Vessel here in Schertz.

In Dallas he interned under Parker University Dr. Davis McAlister D.C. where he learned the importance of promoting and maintaining a healthy active lifestyle by treating athletes and adaptive athletes through various youth, middle school, high school, professional, and network organizations. He has also completed a Veterans Affair rotation within the VA system at the Austin Outpatient Clinic.

His favorite hobbies include CrossFit, running, and spending time with his family. 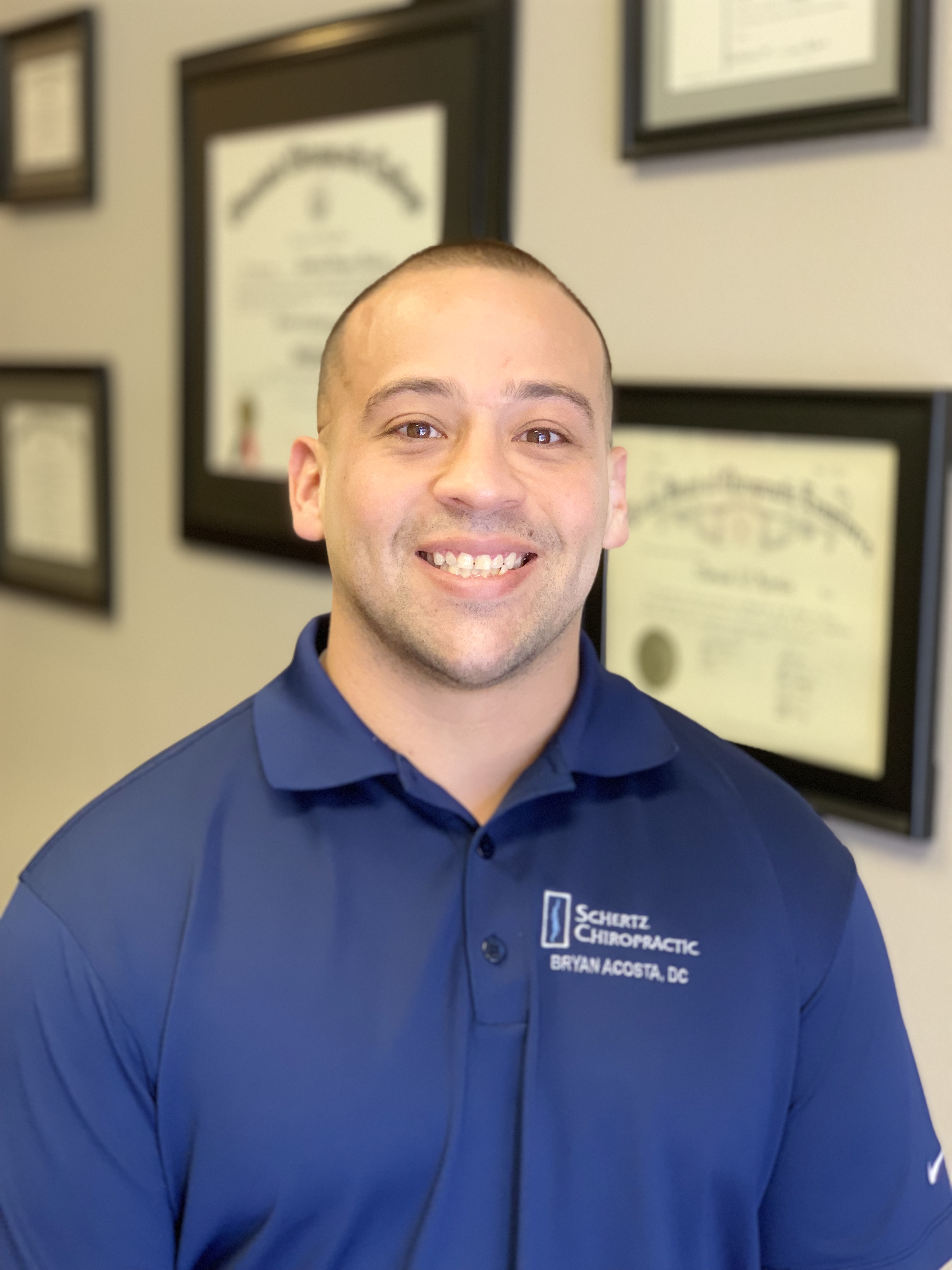 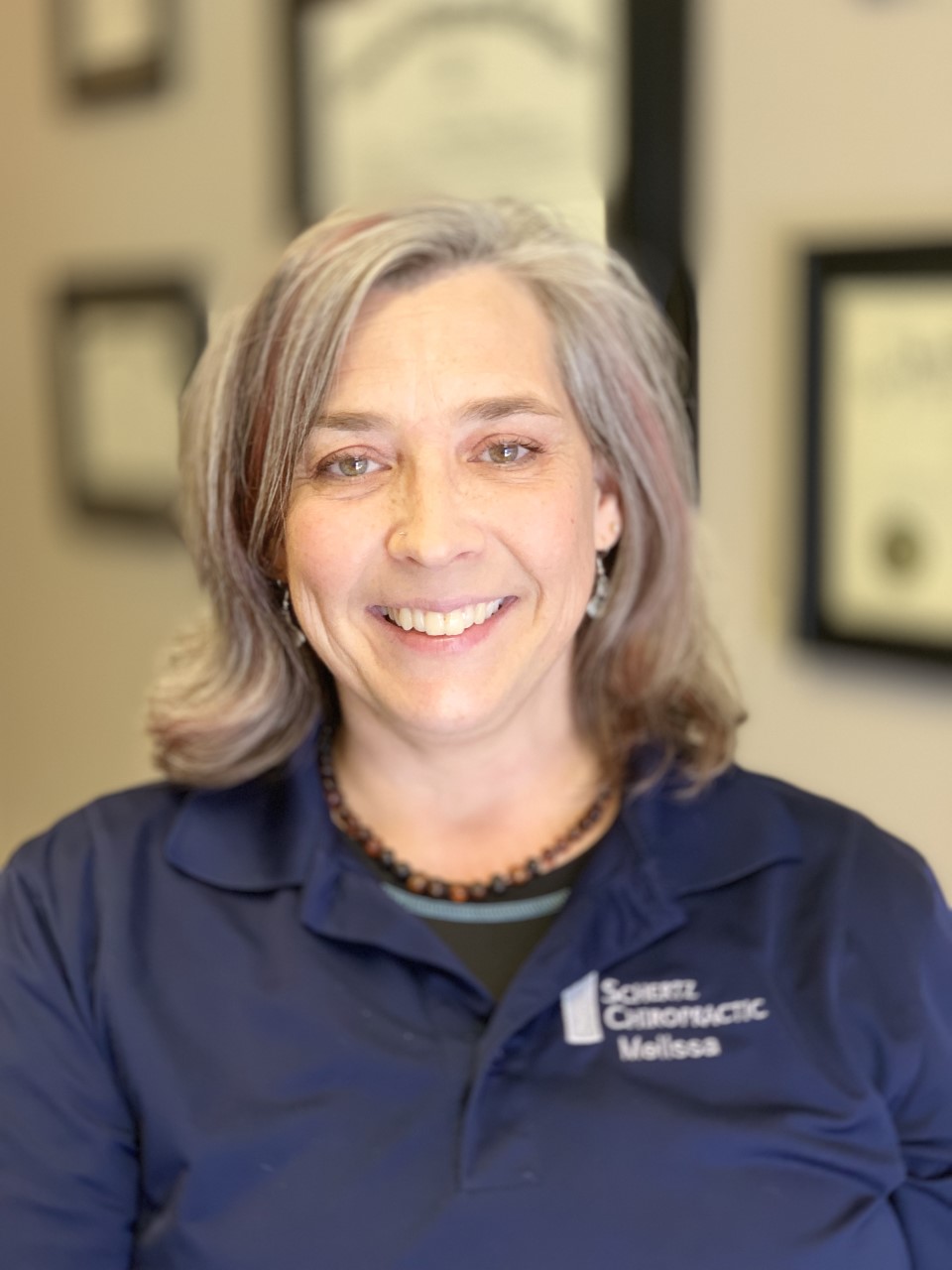 In June 2010, Melissa became a member of our team.  She is an Air Force, Stay-at-Home-Mom, Bagpipe Band, Boy Scouting, and Homeschooling Veteran.  She is an avid quilter, loves to quote movie lines, and is still scared of the movie “Jaws.”

She is a Registered Aromatherapist and is available for consultations at Aromatic Remedies. She is a member of The Alliance of International Aromatherapists.

She has 4 children and is Memaw to Eric Benjamin, Joshua Daniel, Chayton Jaren, Evelyn Anne, and Harlan Myron. 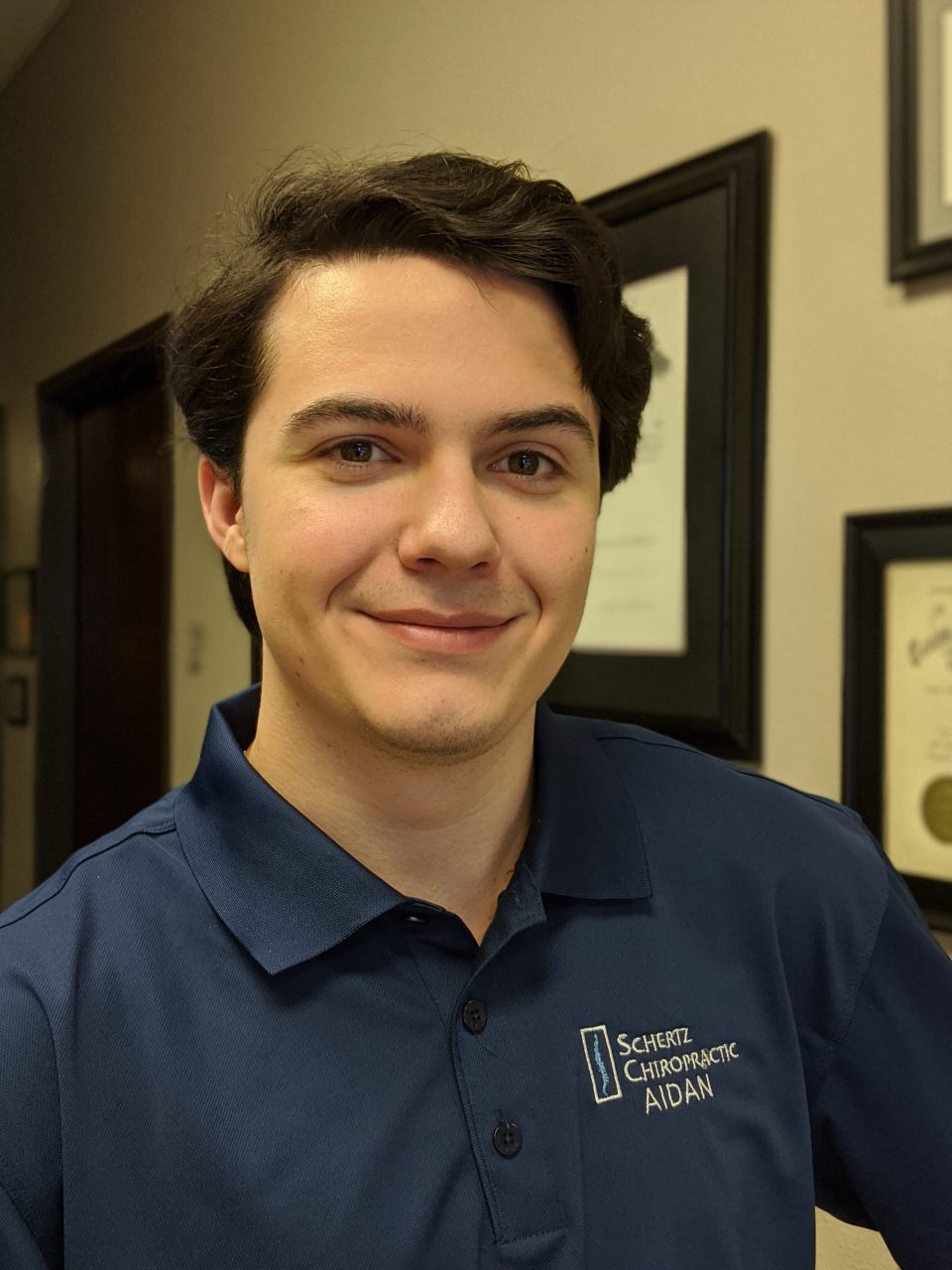 Aidan joined our team in June of 2019. He enjoys working with the patients and seeing them improve. He manages the rehabilitation area and fills in for the front desk as needed. Aidan likes comedy, movie references, song references, and the occasional pun. 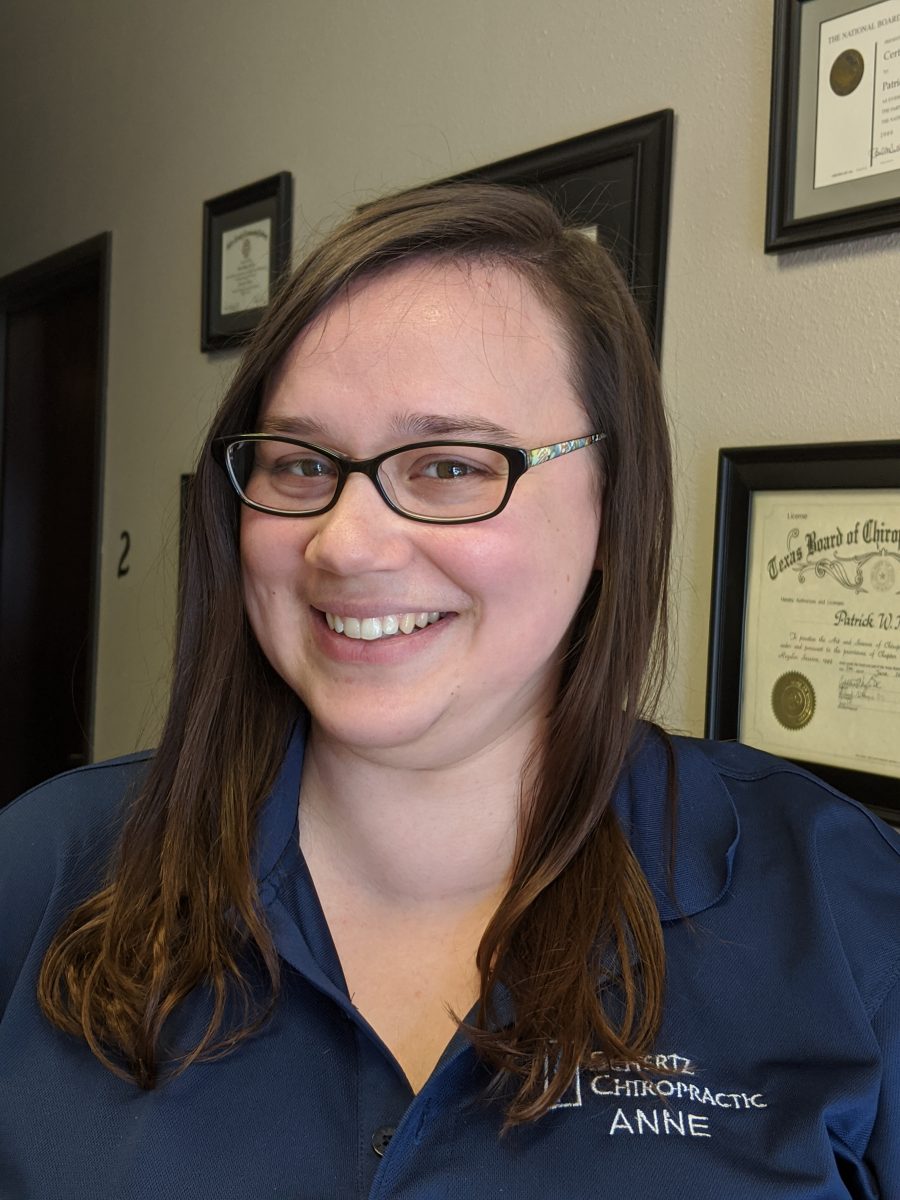 Anne is our Insurance and Billing specialist. She joined our team in October 2019 and is a problem solver. This is perfect, as she solves tough insurance and billing issues every day.

She loves to play board games, drink coffee with her mom, watch baseball, and makes a killer triple-chocolate mousse cake. Her favorite movie is My Fair Lady, she loves to laugh with her husband, play with her cats, and read anything by Bill Peet.